At a time when books are dividing a growing number of communities in Michigan and beyond, they did just the opposite Saturday in Superior Township, where hundreds gathered together to form a human chain to fill the shelves of their new library.

We were proud to put supporter donations to work on helping the Ypsilanti District Library with their November 2018 levy which allowed them to build this new library in Superior Township. 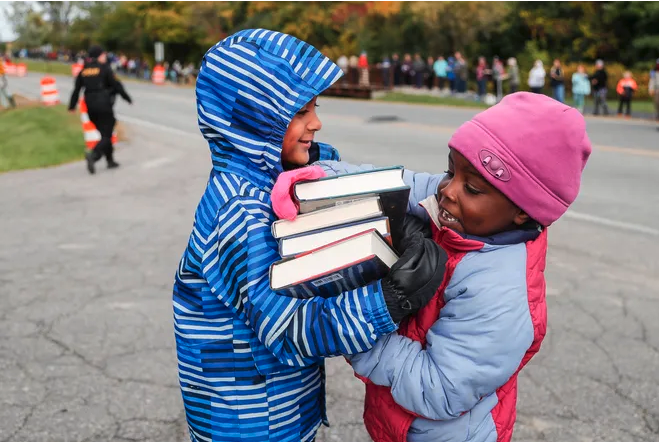 At a time when books are dividing a growing number of communities in Michigan and beyond, they did just the opposite Saturday in Superior Township, where hundreds gathered together to form a human chain to fill the shelves of their new library.

More than 200 volunteers showed up at the old library on MacArthur Boulevard to form a human chain to transfer the library's book collection to the newly constructed library building nearby.

Many began lining up about 1:45 p.m. By 2:10 p.m., a book entitled "Pass It On" by author Marilyn Sadler was heading down the human chain with a GoPro camera attached. It was a special way to record the moment, suggested by youth librarian Nicole Russell. (READ MORE)

Donations from people like you made this event possible!

The November 2018 levy increased operational funding as well as financing to build the new library in Superior Township. Your donations specifically allowed EveryLibrary to provide pro-bono training on community engagement as well as a direct donation to support the Yes committee and training on winning campaigns and elections.

“I’ve led successful millage campaigns at three different libraries, each time with a higher level of complexity and higher stakes. I combined EveryLibrary’s research-based approach with my past experience to garner a 2/3 majority victory for the Ypsilanti District Library, winning every voting precinct. In-person sessions with the EveryLibrary team energized our staff and Board, our advocacy team benefitted from virtual training, and a wealth of online tools provided great ideas. EveryLibrary is the campaign resource public libraries have needed for years.” - Lisa Hoenig, Library Director

Throughout the last 10 years we have supported hundreds of library campaigns, we have fought against bad legislation, pushed back as the AFP spent tens of thousands to keep a libraries from being built, and fought against school library closures across the country. Now, more than ever, we are engaged in highly politicized fights to save school libraries and public libraries from book banners. This isn't a Democrat or Republican issue. We are non-partisan and pro-library.

With support from people like you we have won many of these fights and, in fact, for every dollar we have spent on a campaign we have returned over $1,600 in funding to libraries totaling over 2 billion dollars so far.

For more about our history of success, you can read our latest annual reports here.

EveryLibrary is a registered 501(c)4 organization (FEIN 46-1534149). We invite you to check up on us before donating by finding out more about us on Guidestar, the most trusted guide to non-profits on the Internet.