The Library Tax is Different Part One

This is the first of two posts written by Lance Werner, Director for Kent District Library (MI).

EveryLibrary worked with KDL in 2014 on a 10 year levy renewal for about $20.06 million per year which passed successfully. Of particular note was Mr. Werner’s extensive engagement with local budget watchdog groups well in advance of the ballot. In Part One, Mr. Werner focuses on the reflective and strategic process of choosing the messaging to the public about the library and the ballot measure as part of the information only campaign.

In August 2014, the Kent District Library (KDL) passed its largest tax increase (45%, .88 mills to 1.28 mills) by the widest margin that it has ever achieved (57%). The millage passed in 21 out of 26 municipalities. The August 2014 vote marked the first time that KDL passed a renewal and increase on the first try since 2000. I would be remiss if I failed to state that Kent County is among the most conservative counties in Michigan. Not only is it one of Michigan’s most conservative counties, it also has a robust Tea Party presence and is the home to Tea Party favorites like Congressman Justin Amash. 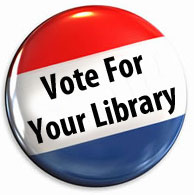 When I began my tenure as the Executive Director of KDL, I was warned by several people in Kent and Ingham Counties that the odds against getting a millage increase passed in Kent County were steep at best. I was also warned that KDL would be lucky to get its renewal passed. I proceeded to venture forward despite the dire warnings and KDL’s track record of achieving millage increases. I was confident that KDL would be successful because I knew something that the naysayers didn’t know. Kent County residents love their library. KDL currently has 60% of the 395,000 residents of its jurisdictional service area as active card holders. In a recent survey conducted by EMC Research, 93% of respondents in KDL’s jurisdictional service area had a favorable to very favorable view of the Kent District Library.

The love of Kent District Library is based on many factors including the incredible service provided by KDL’s passionate employees. Our goal is to create a sense of family with our patrons and among our employees and volunteers. KDL’s employee passion and dedication went a long way to strengthening the public’s trust in our services. KDL staked a claim to being a state leader in early childhood literacy endeavors and as a popular materials library. Obviously, there are many other KDL offerings that garner library love, but the list would be too long for this narrative. I was fortunate to find all of this waiting for me when I began my directorship in 2011; however, the KDL leadership team and I agreed that there needed to be more.

At my first board meeting as KDL’s Executive Director, I asked the board for authorization to create Michigan’s most robust, KDL-specific digital collection. At our second board meeting, the board approved the project and we became Michigan’s premier e-library. KDL was the first library in the state to offer e-magazines and streaming movies. As you might expect, KDL love grew exponentially. KDL circulated approximately 10,000 e-items in 2010 and 523,000 e-items in 2013. You might be asking yourself why I mention this. My reason is as follows: in order to be successful in millage campaigns, it is vital to demonstrate relevance.

While being able to effectively tell a library’s story is critical, having a good story is equally important. We had many compelling things to talk about in regards to our services and funding issues. For instance, KDL cut $1.6 million dollars out of a $15 million dollar budget ($1.3 million out of labor with no layoffs), and were operating at 2006 funding levels. Another talking point was that the average ROI per household in our jurisdictional service area is $1,100 of service for the $70 in property tax KDL receives each year. All of this sounds compelling, but it was not enough. We had to establish toe holds to get traction in our conversations with our taxpayers and to demonstrate that KDL wasn’t an “ordinary” library system or governmental entity.

We knew three years ago that if KDL was to be successful in its millage endeavors, library love alone was not going to carry the day. Library love is the foundation on which millage campaigns must be built. The structure that sits on top of library love has numerous facets. One of the most critical is storytelling. When I started at KDL, we decided that it would be a good idea to gain recognition of KDL services and grow library love by seeking awards for the services that we provide. KDL sought and was recognized by: the Grand Rapids Chamber of Commerce for their EPIC Award for Excellence in Business (KDL was the only governmental entity to ever be considered), the State Librarian’s Citation of Excellence, Lighthouse Recognition from the Michigan Quality Council (KDL is the only library ever to undergo this quality initiative), Quality Service Audit Checklist Excellent Status from the Library of Michigan, the Linda E. Anderson Award from Employers for Better Health, and was recognized as a Library Journal Star Library for the last 3 out of 4 years. All of these accolades helped KDL further reinforce its reputation locally as a well-run and valuable governmental entity and added credibility to our story. We were able to separate KDL from other taxing entities, creating the idea that the library tax is different.

Differentiating library service and library tax funding from other types of municipal services and taxes is vital to success, particularly in a fiscally conservative environment where there is strong anti-tax sentiment. There are a number of tax watchdog/government accountability groups in Kent County. One of them is called the Kent County Taxpayers’ Alliance. I had read numerous stories in the local newspaper about their challenges to many of Kent County’s tax proposals. I had also been warned repeatedly that they were trouble and would launch a counter campaign. They had previously engaged the Super PAC Americans for Prosperity in their challenge to a Grand Rapids road tax. Needless to say, we were concerned. We had very little funding for our grassroots campaign and standing up to a Super PAC-funded counter campaign would have been devastating. Naturally, I received a call from them in April 2014 requesting a talk about our proposed millage increase.

Next week we will cover how that opposition was engaged in Part Two.

It is a slow library news week post May 5 elections, but we were happy to see coverage of our visit to Bakersfield (CA) last week. John Chrastka and Patrick Sweeney visited library and county officials in Kern County (CA) last week to engage in a discussion about the future of libraries in Kern County and alternatives to the recently proposed privatization. The left officials with some solid next steps including how an impartial community survey could help identify the needs of the community.

Chrastka said the community has to determine the current state of library services here and decide together what they want a 21st Century library in Kern County to look like. Then they have to put dollar figure on the difference between the libraries Kern has and the libraries it deserves, he said.

"We really want to find out what people want and what they're willing to do," [Kern County Library Director] Kerr said. "What's next is staff meetings and the survey. We're trying to find out what to do with our libraries. We're OK with taking our time and doing it right."

-Via James Burger in the Bakersfield Californian