This past Tuesday the Cornelius City Library ballot measure was voted down. This would have given the Cornelius Library (OR) 2.4 million dollars to start construction on a three story building that would also include senior housing and a recreational center. 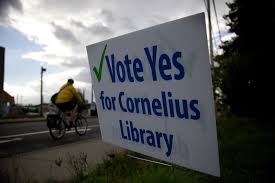 This week we are going to focus on one story. In order to examine the work we are doing for every library as EveryLibrary.

This past Tuesday the Cornelius City Library ballot measure was voted down. This would have given the Cornelius Library (OR) 2.4 million dollars to start construction on a three story building that would also include senior housing and a recreational center. According to this OregonLive article:

Cornelius library has seen an 83 percent increase in visitors since 2004, but the building lacks enough space for book collections, computers, community meetings and activities such as story time. Every library in Washington County – except Cornelius – has remodeled, expanded, added a branch or rebuilt since 2000.

From the start, we were pretty confident that this measure would pass. Cornelius library had done a poll in September 2012 in which 71% of respondents said they were likely to vote yes on a bond for a new library. I attended the first meeting of the ballot committee and felt inspired by the commitment, excitement, and high level of experience in the room. The Yes for Cornelius Library committee did lots of great work including holding signs in the pouring rain, distributing flyers to virtually every home in Cornelius, putting out yard signs, and getting in the local newspapers.

Library Director Karen Hill said she didn't hear much disapproval of the project until just before the election. She thought asking citizens for $2.4 million was reasonable."I think a lot of people just don't want more taxes right now," she said.

I went out myself a couple weeks ago to help distribute those flyers door to door. Since this one was so close to home for me, I felt I had to be involved. I wasn't the only one, but trouble with recruitment plagued this campaign. Often there was only a small core group of dedicated individuals carrying out campaign activities.

At EveryLibrary we want to share this story as a lesson learned. Yes, it all came down to election day for Cornelius. But, we can move this forward by helping others. Ballot committees need earlier planning, more volunteers, more money, and more strategy. EveryLibrary can provide all of that, but we need your continued support. Donate today to help keep us out there consulting with ballot committees, providing GOTV training, and spreading awareness of our mission to secure funding for libraries. Our first look at 2013 library elections reveals that there are 57 library measures on ballots across the US. Your help is crucial, necessary, and deeply appreciated.

Join us next week for another round up. Happy trails!