We are now more than halfway through 2014, but we continue to learn about new ballot initiatives for libraries. The Clarkston Independence District Library (MI) is attempting to win a replacement millage for the second time on the August 5th election. 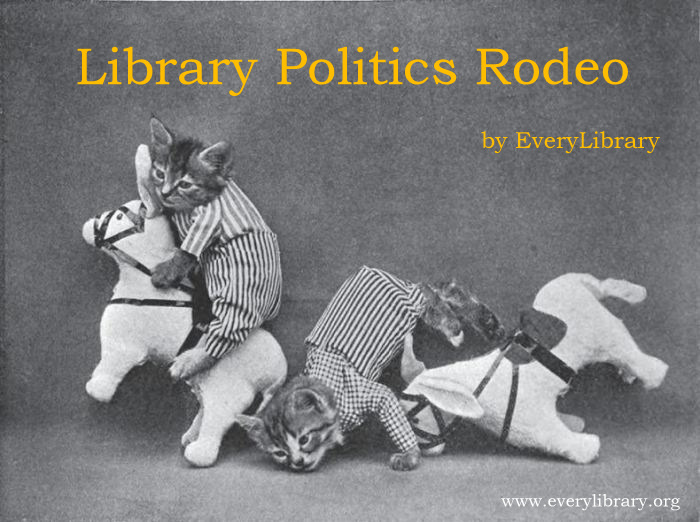 This week the Rodeo was compiled and written with the help of our intern Rachel Korman.

We are now more than halfway through 2014, but we continue to learn about new ballot initiatives for libraries. The Clarkston Independence District Library (MI) is attempting to win a replacement millage for the second time on the August 5th election. The 1.25 millage on the ballot is necessary for the library to function- so much so that if voters say no to the measure, the library will be legally forced to shut its doors. This is a must pass initiative and we will be watching it closely.

Voters of Sherwood (AR) will be asked to decide on a 1.3 millage property tax that will appear on the November 4th ballot for the creation of a new library. The City Council voted unanimously for the measure to appear on the general election ballot rather than hold special election, which had been pushed for by library supporters and the Central Arkansas Library System. It is believed that the measure will be more difficult to pass on the general election ballot rather than a special election ballot. The millage will be temporary, as it will be used to pay off bonds sold to build a new library branch. Once the bonds are paid, the millage will no longer be needed.

As we reported in the June 24th Rodeo, Park Ridge (IL) alderman voted in favor of placing a referendum on the November ballot to increase property taxes for more funding for the Park Ridge Public Library. The library has made steps towards informing the public about the referendum, including handing out informative postcards at the Taste of Park Ridge event, where residents can also meet with library trustees and discuss the ballot measure with them. The library will continue to brainstorm ideas and execute initiatives for their information only campaign about the referendum. Simultaneously, the library will come up with a plan B in case the referendum fails. There is good work going on in Park Ridge!

The Euclid Public Library (OH) is hoping to secure a 4-mill renewal and an additional 1.6-mill in funding through a tax levy that will be placed on the November 4th ballot. If passed, the levy would produce $3.2 million in annual revenue and would help the library maintain its services and programs for the next five years, as well as hire staff to fill positions that have been empty due to consistent funding decreases over the past few years.

City Council members in Stanwood (WA) voted unanimously to include a measure on the November 4th ballot to annex their city library into the Sno-Isle Libraries system. The annexation will create a library tax for Stanwood residents, which would secure a specific funding base for the library while also allowing city funds from the general tax base to be put toward other city services. Stanwood City Council will make the final vote about the ballot measure on July 10th, before it is sent to the Sno-Isle Board of Trustees and, finally, the Snohomish County Council, for the measure’s inclusion on the November 4th ballot.

A library taking the long view to consider future funding is the Waverly Free Library (NY), where the board of trustees is considering alternative means of funding, including a property tax levy referendum, in order to maintain the library’s operations. The option to use a referendum could be decided upon as early as September, and would appear on the April 2015 ballot, if approved.

Yesterday we announced 3 additional campaigns we are supporting this year. Your continued support through donations helps us get on the ground with consulting and training to put campaign best practices to work. We are thankful for your generosity and attention to library advocacy around the one day when it matters most, election day. As you turn your attention to the end of 2014 please consider helping us help libraries go our strong on their August - December election days. Donate today.