Help Us Win With Our $5K to Philly Challenge

You might forget that we are a new organization. After all, in the last six months we have helped libraries win over 8.75 million dollars in funding at the ballot box through direct financial support of local PACs, campaign consultancy, social media strategies, and trainings.

You might forget that we are a new organization. 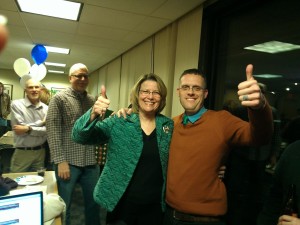 After all, in the last six months we have helped libraries win over 8.75 million dollars in funding at the ballot box through direct financial support of local PACs, campaign consultancy, social media strategies, and trainings.  That’s over one thousand dollars won for libraries with every one dollar we have spent on campaign funding.  But, we are still building our coalition of supporters, resources, and our list of advocates so that we can win even more!

You see, the problem is that libraries are well supported by communities but tax initiatives in this political climate often result in losses for libraries.  This is incredibly disheartening because, according to an OCLC study, libraries are only supported by less than 1.2% of local tax revenue on average.  Of course, library use has increased over 20% and the use of library’s digital resources has increased 86%!  However, this 1.1% has not increased with the increased burden on library resources.

So, this is where you come in.  With our track record of success we have the power, the knowledge, and the skills to change all of this.  The only thing that we are lacking is your financial support.  We are trying to raise 5 thousand dollars in time for the American Library Association Conference in January.  This money will go to help us build our network of supporters, grow our resources, and become an even stronger organization at the conference.  This is our opportunity to really make a difference in library funding and it can only be done with your support.

We’re asking you to give to our $5K to Philly Rally and help us continue to build an organization who’s only purpose is to get libraries the funding they deserve.  You can give to our organization here on our fundraising page.  We also ask that you share this on your community and state listervs, Facebook walls, Twitter, and all the other social media.  This is the only way that we can win for you.  Its up to you.