AAPC recognizes Patrick “PC” Sweeney as a leading national political consultant for his work with libraries.

EveryLibrary is excited to announce that Patrick “PC” Sweeney has been honored as a “40 Under 40” award winner by the American Association of Political Consultants (AAPC). 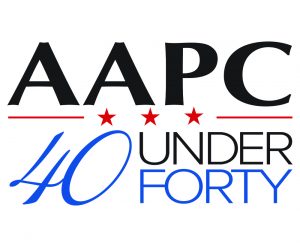 This prestigious award recognizes him as one of the best and brightest political strategists nationally. Patrick is receiving this award for his non-partisan political consulting work with EveryLibrary, the first and only national political action committee for libraries. Since 2012, Patrick has been instrumental in helping nearly 100 libraries on their Election Days and for growing the EveryLibrary digital network of library activists to over 300,000 Americans on social media.

Patrick will be recognized as “40 Under 40” award winners at the 2019 Annual Pollie Awards and Conference on April 2nd, 2019 in Napa Valley, California. The AAPC conference brings together some of the best political professionals across the political spectrum to network and learn from each other. It is attended by top political technology innovators, pollsters, pundits and service providers. Eighteen Republicans, 18 Democrats, and 4 nonpartisan professionals in the United States were named to AAPC’s exclusive “40 Under 40” winners list. Candidates were evaluated on leadership and professional accomplishments in politics and public affairs, and for their contributions to the health of the political business community.

“As a co-founder and Political Director for EveryLibrary, Patrick has created a unique, powerful network of Americans who take action for libraries,” says John Chrastka, Executive Director of EveryLibrary. “He is the foremost strategist in the library ecosystem on how to engage and activate people from all walks of life for libraries.”

According to AAPC Vice President Rose Kapolczynski, “We received a record-breaking 250 nominations this year, demonstrating the exciting growth in the political consulting and public affairs field. Our bipartisan team of judges reviewed the nominations representing every part of our industry and were impressed by the talent and commitment to excellence in the next generation of political professionals. We’re looking forward to celebrating this year’s 40 Under 40 class at the April Pollies conference in Napa.”

At EveryLibrary, Patrick is responsible for digital engagement across several platforms including action.everylibrary.org and SaveSchoolLibrarians.org. He is the primary contact with dozens of local library campaigns, school librarians who are facing a crisis, and state library organizations for their legislative and advocacy agendas. “Patrick brings a librarian’s values system of equity and access to EveryLibrary’ mission of “Building voter support for libraries,” adds Chrastka. “I am proud to see his leadership and his innovations recognized by other political consultants across the country.”