EveryLibrary is pleased to announce that we've chosen Cincinnati, Ohio based artist/librarian Steve Kemple as our first "Artist-In-Residence".

EveryLibrary is pleased to announce that we've chosen Cincinnati, Ohio based artist/librarian Steve Kemple as our first "Artist-In-Residence".

Over the course of six months, Steve will curate a series of virtual art installations and performances at libraries everywhere. The project, called We’re In This Together, will consist of a series of simple instructions to be carried out simultaneously by library staff at libraries nationwide. With this project Steve is interested in “transforming libraries from the inside out with magical thinking.” His goal is to “ignite a sense of wonder among library workers everywhere, encouraging libraries to approach with new eyes their vital role in the public sphere and the wider ecosystem of cultural institutions.”

From voter behavioral data and our experience on over two dozen campaigns, we know that voters are motivated to vote because of their perception of both the library as an institution and of the librarians as compassionate, engaged professionals in their communities.  We believe that there are some very effective and resonate slogans, images, and campaigns about libraries at loose in the world.  We don't see people talking about their librarians, or the brand of librarian, as much as we need them to.  At EveryLibrary, we think that is because we don't know how to talk about ourselves well.  We'd like to suggest that if we can't talk about ourselves, we can at least start by talking about our colleagues and friends.

Here is how to participate in We're In This Together

Over the course of the six months--from June to November--Steve will gradually unveil the events here and on our Facebook, Twitter, Tumblr, and Pinterest. Each project will consist of a series of simple instructions. Some of them will be very simple, that any library staff member will be able to do, while others will require a bit more coordination.

- Sign up for email updates here (http://goo.gl/forms/z9EbkCOvRD). Signing up for emails doesn’t mean you’re committing to participate, it just means you’ll get occasional updates about upcoming performances, online discussions, and information about how you or your library can get involved.

- PERFORMANCE 1 - Monday, June 15 - "Shhhhh… Show off your mad shushing skills!" Between now and June 15, call 513-549-6647 and leave a voicemail with your best librarian "shush". We'll compile the best submissions in a downloadable album to be released on Friday, June 19. Feel free to be as creative as you like and call back as many times as you want. [update: the Facebook Event page]

- PERFORMANCE 2 - Tuesday June 23 - Thinking of You. If you are a library director, administrator, or someone who can act publicly on behalf of your library, select a nearby public or cultural institution and send them flowers. Include a handwritten note that says "Dear [name of recipient institution]: Thinking of you. Love, [the name of your library]" If possible flowers should be delivered in person by the library director to the director of the recipient institution. Send a snapshot of the flowers (cell phone picture is fine) with the handwritten note clearly visible to [email protected] All photographs will be posted online as well as physical prints in a future art exhibition. [update: the Facebook Event page]

- PERFORMANCE 4 - August 17 - 24: "The World's Smallest Sculpture Visits Your Library". The world's smallest sculpture will be on display at your library for exactly one week. It's so small no one can see it. It's up to you to decide how to display it.

- PERFORMANCE 5 - November 3: "We're In This (Submarine) Together". Imagine a world where libraries around the globe can come together to play submarine sound effects very quietly all at the same time. Imagine the possibilities. Imagine the reference questions we could answer, exactly like normal, but in a submarine. Friends, colleagues, I am here to tell you that such a world is within our grasp. To #makeithappen, simply play this video (https://youtu.be/GFUcRu9UcAo?t=23s) and turn the volume so quietly that only you can hear the sonar pings softly emanating from your computer's speaker. We can achieve this together. The future of libraries is here and now. And we are on a submarine.

- PERFORMANCE 6 - November 16: "Catalog the Sunset". ATTENTION LIBRARY CATALOGERS... Your mission: On the evening of Monday, November 16th, observe the sunset. Take notes. Think about your experience. Then, on Tuesday, November 17th, catalog it. More details here.

- PERFORMANCE 7 - November 18: "High-Five A Librarian Day". Go to your nearest library & high-five a librarian! If you work in a library, high-five all your co-workers! High-five your patrons! High-five everyone! Even Neil Gaiman says you should do it!

Can I participate if I don't work in a library?
Of course! Just follow the instructions as best you can while in a library of some kind. The whole idea is to be as inclusive as possible.

Do I need permission from my supervisor or director to participate?
You may. We don't want anyone to get in hot water for doing something weird at work, and communication is always good, but most of these performances are designed to be so simple you can do them on your own with minimal disruption. A few might involve interactions with coworkers and patrons, so it's probably a good idea to keep everyone informed. But use your best judgement.

Who is the intended audience?
You. Us. Library workers everywhere. The goal is to change the professional community from the inside out so we can go and better serve our communities. We're in this together.

Some of these instructions seem a little vague. Is that on purpose?
Yes. Creative interpretation is encouraged.

ABOUT OUR ARTIST IN RESIDENCE 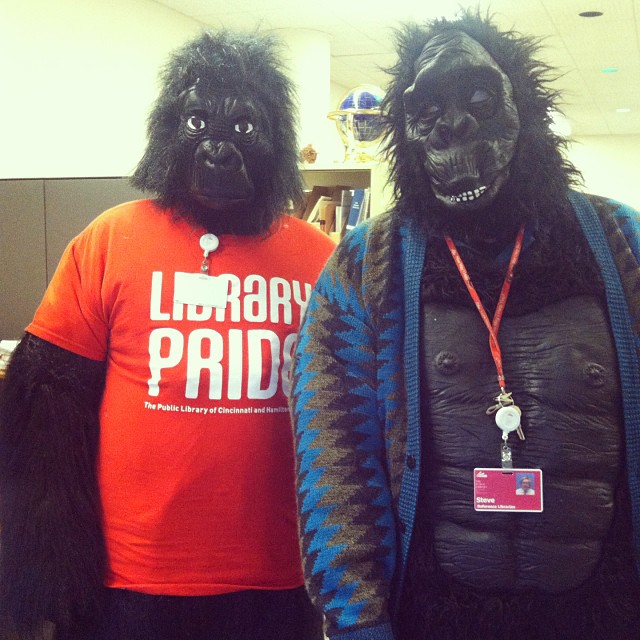 Steve Kemple is known for his unique, often humorous integration of conceptual and performance art into library professional culture, as well as for his gorilla suit, which he sometimes wears behind the reference desk at Cincinnati’s Main Library. His work has been profiled in publications such as Paste Magazine, Library Journal, Cincinnati Magazine, Cincinnati CityBeat and Aeqai.com.

You can look at his art website at www.stevekemple.com.