AIR Interview – Amethyst “in progress” and an Interview with the Playwright

amethyst. received its world premiere at the Philadelphia Fringe Festival and its library premier at the Princeton Public Library in September 2019. Brandon and his production company Love Drunk Life have made an "in progress" version of amethyst. available for download.

Erinn Batykefer - Brandon, this is…. like, the millionth time you have created new and exciting theater work in a library context. amethyst., which you wrote as part of the 2019 Every Library artist residency, even fictionalizes your first experience of doing theater in a library by giving that narrative to the main character, Cade. You’ve said before in interviews for the Library as Incubator Project that you actually prefer to create theater in spaces that aren’t theaters after the experience you had with Princeton Public Library. Can you tell us more about how libraries have fit into your professional evolution? 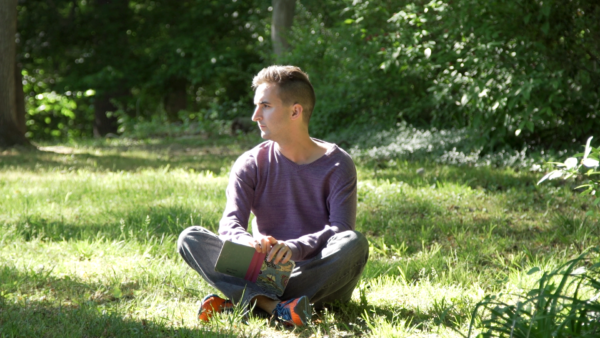 Brandon Monokian - One of my first paid directing jobs was co-creating the Page to Stage series with Janie Hermann, which was presenting staged readings of plays that had been adapted from literature inside the Princeton Public Library's community room. We did the series for three years, so over the course of many plays, we came across moments that maybe you wouldn’t consider ideal for staging inside a community room. My favorite of these moments was creating the river of forgetfulnes s in Sarah Ruhl’s Eurydice, which became a massive collection of recycled water bottles, which in person was such a badass visual. That sort of creative problem solving has been instrumental to me in creating new and exciting ways of storytelling, and it’s also allowed me to take on jobs and put up plays in other places that I don’t know I would have been confident in my abilities had I otherwise not had that wonderful learning experience.

Erinn - Is Janie Hermann your librarian godmother? Tell the truth.

Brandon - Janie Hermann has been one of, if not the most important advocates for my career. Her willingness to help me create and make space and secure funding for my wild ideas and also be a true collaborator have meant more to me than I think is possible to put into words. 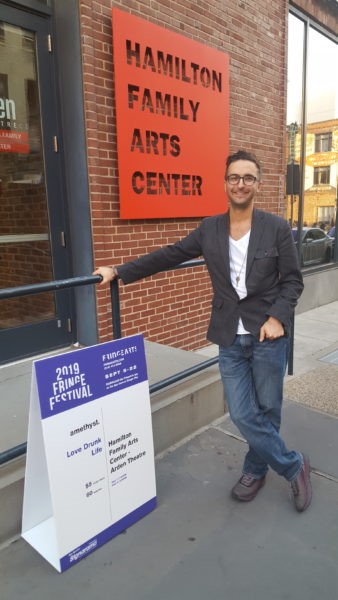 Erinn - So, tell us more about amethyst. You drafted this play over the course of a few months while you were on the road and participating in some exciting festivals and retreats-- that’s new for you, isn’t it?  Do you feel that being on the move changed how you wrote?

Brandon - It’s been a busy year for me. The busiest career-wise in a long time. I was having to hand in simultaneous drafts of amethyst. and my book Call Me By Your Stage Name which I don’t know if they seem similar at a first glance, but they are both a response to my relationship with the world at large and also just me kind of having a breakdown on paper. I was traveling to a lot of different places in a short amount of time, California, Alaska, Philadelphia, New York, and making theatre in a lot of those places, and to be honest I don’t think it changed how I wrote because I was so busy. I went to North Carolina last November to a creative retreat on the top of a mountain and it was only for a few days but that impacted me because I wasn’t busy, I was just there to kind of heal and get back in touch with being creative. I have a really distinct memory of me sitting at a bonfire on the top of this mountain with just me and the guy hosting the fire. Everyone else had left but I stayed and he just played me music and it was super cold and dark and I had shaved my head and I was just really still and let myself really experience the moment. That was impactful. 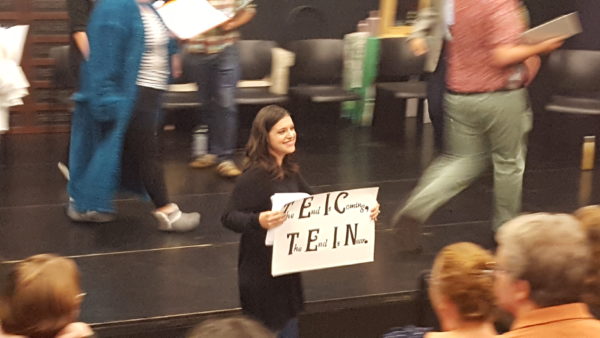 Erinn - One thing I am fascinated by in writing for the stage is how the script is alive. If I go pick up Lauren Groff’s Fates and Furies at my local library, read it, and then go listen to it on audio, it might be a slightly different experience, but it’s the same words on the page. Your work is more protean than that-- your scripts respond to rehearsals. For instance, this year’s Philly Fringe was the first staging of amethyst., and then Princeton Public Library hosted a reading-- but in between, you made changes. And on stage, you make changes to respond to the conditions of the theater or the limits of budget (no vodka, for instance). Can you tell us about that part of the process from the standpoint of your work as a writer? Are your scripts ever really done? [Murder and Booze has changed a lot too, hasn’t it?

Brandon - If I come back to scripts at a later date then I’ll make changes, but I don’t really torment over them when I’m moving on to a new project like maybe some other artists do. I honestly get bored very easily so I just move on and think whatever I’m working on in the moment is the best thing I’ve ever created, which usually is incorrect.

But yes, I think the times that I’ve brought back works like Murder & Booze Cabaret or my play Grimm Women which has happened a few different times, they do tend to change. I like to make adjustments for whatever actors are playing the parts. Working with actors and just hearing their natural speaking patterns in life inspires me a lot when I’m writing plays. It certainly makes it more alive and less in my own singular voice which I tend to fall into when I’m writing. 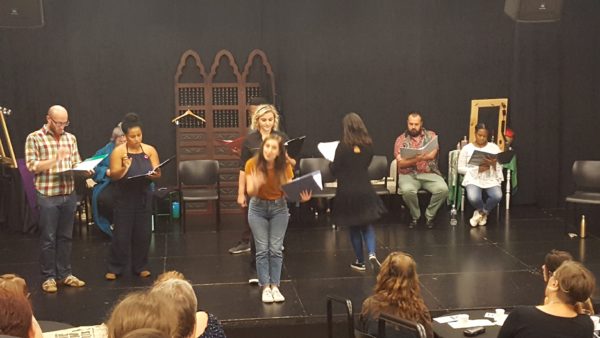 Erinn - Okay, so it’s the end of the world (at least it feels like it, watching the news!) Do you think you’d go for a wardrobe change for End of the World Brandon?

Brandon - I’ve been thinking a lot lately about just walking around wearing a muumuu and holding a chalice filled with Vanderpump Rosé.

Erinn - The Library as Incubator Project, which you contributed to while it was live, focused on the need to have access to creativity as a fundamental service in libraries. I know you’re not a librarian, but you’re an artist who has found a home in libraries-- what would you say to LibraryLand at large about what it means to create a space for creativity in the community? What is one thing you think every library should do or have to make that space for artists like you?

Brandon - If you are bringing artists into your library, this is what they need: space, funds, and an audience. And I think that goes just beyond getting patrons to attend the actual events, but also hooking them up with your local press outlets to help tell and sell the story of their work.

Also, I’d like to take this time to put it out into the universe that I’d really like to have a resident theatre and arts company at a library. Ideally in a place where I can live with alpacas.

Erinn - You’ve consistently created new work, won residencies and commissions, built a production company and a business, made a movie, and participated in Philly Fringe over the last few years since your first Revolutionary Readings show at PPL. How has your approach to creative work evolved? How do you stay motivated and engaged when everything feels like a dumpster fire?

Brandon - My creative work has evolved in the sense that if I’m going to work I have to be much more disciplined and focused than I was when I was younger. I used to need to get pretty drunk to write and then I would write an incredible amount in one sitting and edit sober over coffee. And I worked that way for years but it ultimately became an unsustainable way to work. Now I can’t drink at all when I write (which isn’t to say I don’t have a nice glass of wine when the writing is over). But you need that sort of discipline in most areas of your life as you age, especially in this day where you are locked in to a constant feed of tweets and there are 80 brands of cereal to choose from and coconut oil is healthy one day but the zodiac killer the next.  Plus, now that I’m climbing well into my 30’s, if I skip a day of moisturizing, I look like I’m walking around on my way to an audition to be the new Crypt Keeper.  Gotta keep that discipline and focus!

As far as staying motivated and engaged, If I’m being totally honest, I don’t always do a great job of staying either of those things when everything feels like a dumpster fire. Lana Del Rey just came out with a new song called The Greatest and when I heard the line “I guess I’m burnt out after all” I burst into tears. That’s not a good sign. But fortunately I know myself enough now to know what to do when I hit that burnout which is make sure I get more sleep and I turn to the two books that have helped me the most which are The Artist’s Way by Julia Cameron and If You Have to Cry Go Outside by Kelly Cutrone.

Erinn - Talk to the aspiring writers out there. What do you know now that you wish you’d known when you first started?

Brandon - Right now I’m looking to the young people for the advice. I’m currently directing a group of young people in a show and they have such joy in what they are doing, in a way that I haven’t had in my own work in years. It’s not to say I’ve been walking around miserable doing films and plays, but would I say I’ve been joyful? Nope. You get jaded and hardened after so much heartbreak in a difficult career path in world that can rarely be kind and is often super lonely, at least for me. The kids also have such a sense of hope. I’m looking to get that hope back into my work and back into my outlook on life.