We're finishing up our review of our November 2014 campaigns with a look at the tactical importance and strategic influence of social media to localize campaign messages.  Parts 1 - 3 are up and ready to read.

We're finishing up our review of our November 2014 campaigns with a look at the tactical importance and strategic influence of social media to localize campaign messages.  Parts 1 - 3 are up and ready to read.

Josephine County, Oregon lost their taxpayer funded library in 2007.  In 2009, the Josephine Community Libraries, Inc. was organized as a donor supported non-profit to run library services in the county.  JCL doesn't get a nickel of tax support from the county.  And unfortunately with a 47% to 53% loss on November 4th, it still doesn't.  Not many public services are funded in Josephine County.  The voters there don't pass a lot of ballot measures to increase or create new funding for the public good.  Across the county, there is a tenor about taxes which the library community needed to try to overcome.  It's a negativity that makes any measure funding the public good an uphill battle.

We share a philosophy with the folks who organized and ran KOLO - Keep Our Libraries Open - the local PAC that organized in a multi-year campaign to put the library back into tax support.  We got involved with them in November 2013 to support a citizen-lead petition drive to put a public funding measure on the ballot.  And by April 2014, the petition drive was rather successful.  They needed 8,500 qualified signatures and got nearly 10,000 people sign.  As they moved into campaign mode, KOLO's skilled data cruncher was hard at work looking to see which voters needed to be contacted where.  They were cognizant that in 2006 they lost with 40% of the vote.  We helped fund their transition from a petition drive to a campaign. They ramped-up the door-to-door and phone banks, did solid community group outreach, and increased the signage and print advertising in this rural county.  While they didn't win, the 47% Yes vote was significantly more than last time.  What was new for them was Facebook and the web. 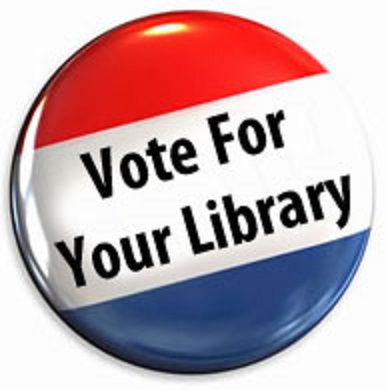 Their pages weren't passive.  By Election Day, their 642 Likers provided a substantial advertising reach into the 60,000+ voting age residents.  We helped them shape their online message and target their spending for maximum effect.  They focused their outreach on the cities - both their person-to-person as well as their paid social media.  One reinforced the other.  They made it easy to Share about the campaign and they reinforced the Shares with advertising.  When all the votes were counted, KOLO reported: "Data from the Josephine County Clerk’s office showed that all precincts within the boundary of the City of Grants Pass voted in favor of the library district on the November ballot with a total of 55% voting yes. Other precincts that passed the measure include the City of Cave Junction, Kerby, and the Williams precinct, all near the location of a library branch. In Wolf Creek, the measure failed by only eight votes."  The economy in Josephine County hasn't gotten better since 2006.  It's gone through the same Great Recession that all of us have.  Plus, the habit of not paying taxes for the library has become ingrained.  What changed for the 2014 campaign was their ability to use social media and paid advertising in a highly targeted and inexpensive (per contact) way.

Paulding County, Ohio has one of the oldest Carnegie library buildings still in use anywhere.  They take a great deal of pride in that.  But the county has similar habits about funding library services that the folks in Josephine County have.  This November, the library was re-running a measure for basic operational funding that they had lost in May 2014.  Back in May, the Board had asked voters for a 2.17 mil levy for 4 years to run the library day-to-day. That measure failed by 41% to 59%.  The Board and staff reworked the budget and reduced the necessary levy for November. We got involved shortly thereafter to help run a 1.9 mil levy for $440,000 / year for 4 years.  It is a lot less funding, but was a must-pass moment. In both campaigns, the library staff put on a solid Information Only campaign by conducting outreach to local community groups, stakeholders, and organizations.  Their public awareness campaign "Support PCCL" ran a long series of #libraryproud web and Facebook messages across the country to build affinity for the library and activate library supporters. In both May and November, the YES committee was the public face for the library (they even saved a little money by reusing the May 'Vote YES' signs in November).  But what EveryLibrary was able to do with them in November was to help them build out and fund a paid, targeted social media ad campaign on Facebook.

We're comfortable talking in greater detail about the reach that YES for PCCL's Facebook ads had because renewal passed. But it only passed by 26 votes out of 5,770 cast.  Finding and activating those 26 YES votes (while finding and activating an additional 9% of voters in a General instead of a Primary election) took funding.  We invested $1,500 in the YES efforts. Part was spent on additional signage, some went to new print ads, and some to short radio spots.  But the biggest new opportunity we brought was to let them take $500 of it and spent it on a series of Facebook ads designed to build page Likes, boost particular posts, and get eyeballs on their website messaging.

Paulding County isn't a big place.  The total Facebook user base there is about 6,400 voting age adults.  When we look at just people who are 24 years old and older, it's about 5,000 people (18 - 24 year olds don't interact with political ads as much).  When looking at just women on Facebook, it's 3,000 people (ads to men perform less effectively than to women).  For just $5 a day, the county-wide ads could reach between 500 - 1200 people.  For $22 a day, they would top-out their inventory of available Facebook users.  With our help, every endorsement in the local press was boosted.  Every picture of families putting up their yard sign was carried around the county with an ad spend.  Every good word written by neighbors to tell other neighbors about how important the library is and how crucial for their community a Yes vote was on November 4th was enhanced and broadcast.  By the end of the campaign there were 235 Likes on the page.  The reach for advertising to their 'friends of friends' was nearly 100% of Facebook users in the County.  For a little under $500 there were 27,000 ad impressions, 800 page interactions, and 26 more YES votes than NO votes.  It was our investment in securing $440,000 per year for 4 years to run the library.  If you are doing the math, that's $19,23 per vote.  No money changed hands for those votes, though.  It was ad impressions plus Get Out the Vote and Information Only campaigning at work.